I'm Dreaming of a Sheepy Christmas


Yesterday was Christmas Day. I spent the day knitting and weaving. Perfect. I also spent some time treasuring my new sheepy possessions. 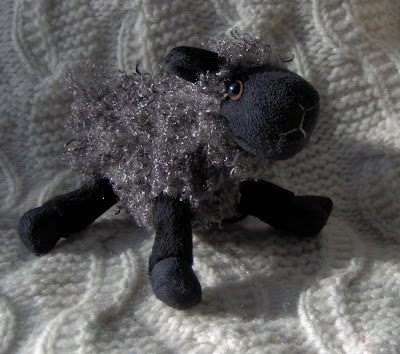 The other sheepy items were presents I bought for myself. I was in Interquilten the other day and succumbed to the siren call of a sheepy fabric, Patt# Farm-C 7744 from Timeless Treasures Fabrics. I’ve got 2 yards. Don’t have a plan yet. Maybe pillowcases? 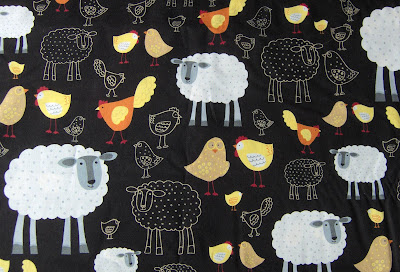 The other impulse buy was an adorable mug by Wacky Woolies. It’s perfect for my morning cup of coffee – it holds just the right amount of caffeine juice. I haven’t tried tea in it yet. 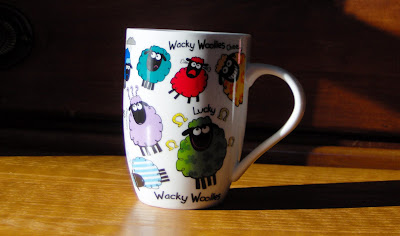 
My friend Becky McD. – the same friend who has crocheted so many beautiful bags for me – is going to make me another bag. A bigger one. This one’ll be sewn, not crocheted. The bits of this bag have been gathered over many years.

When I was going to school in Tucson in the late ‘80’s, I had a Dalmatian, “Taxi”. He was a true gentleman. I was crazy about him. That’s when I started collecting Dalmatian coffee cups. And I found this fabric: 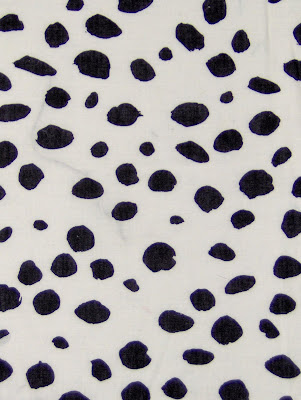 Taxi died in 1995, but I still have the fabric. I also have my second Dalmatian, “Toby”. And I’m crazy about her. And I continue to gather Dalmatian-themed stuff.

Becky found this upholstery fabric for me a few years ago: 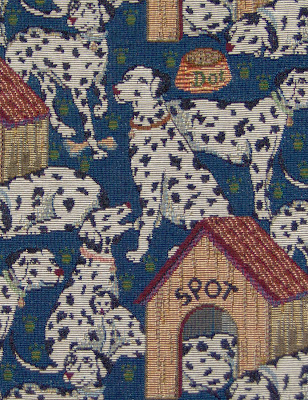 Becky’s a fabulous seamstress. She has made many beautiful bags of all sizes. I asked her if she’d make a bag for me with the Dalmatian upholstery fabric and use the dotted fabric as the lining. She said, “Of course!”

But she suggested that I weave an inkle band for the bag strap. Now, my yarn stash is primarily for knitting; I really didn’t have anything Dalmatian-y in my yarn stash that would work on my inkle loom. So I asked my weaving friends Marty F. and Carol S. if they had any cotton weaving yarns in the right colors that they might be able to spare. Marty gave me some black and white yarns; Carol gave me some blues. Here’s what I wove last week: 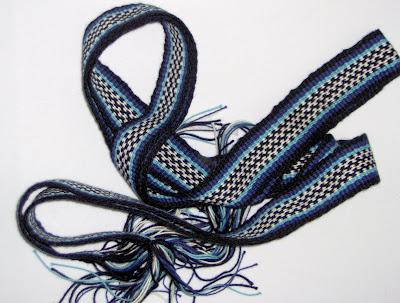 So, now all the parts are ready. 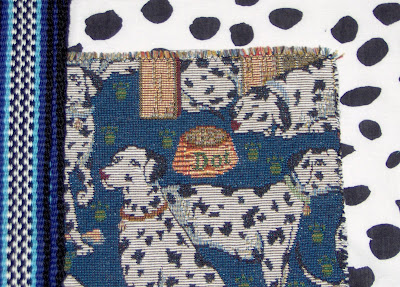 I’m going to knit a hat for Becky and she’s going to sew a spectacular Dalmatian bag for me. I am lucky to have such generous friends.

I wish you all friends as good as mine. Merry Christmas!
Posted by Amy Tyler at 9:42 AM 1 comment:


Few would disagree that angora (bunny “wool”) is among the softest fibers around. After touching angora, even cashmere can feel coarse. What’s not to love?

Well, as much as I admire the softness of angora, I have not really liked it as a fiber for spinning. Probably due to my first spinning experience with it.

When I lived in Nebraska, a fiber friend, Diann B., gave me some angora from one of her bunnies. Lovely grey fiber. Super super soft. I’d seen some of Diann’s spinning and crocheting of her fiber and admired it. I was looking forward to my first angora experience.

So, I spun some singles from the grey. At that time, I was working on a series of scarves from “energized” singles (they got published in Spin Off, Spring 2006 and again in Interweave Knit & Spin 2011), and I thought angora would be a great material for such a scarf. I mean! What could be more neck-worthy than angora?

I knitted up a swatch. 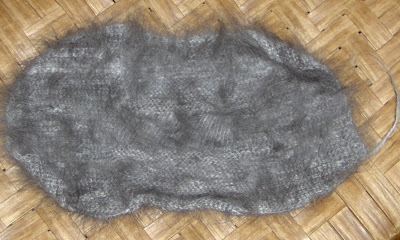 And I did not like the result. To me, it looked like a pelt. Or a dead rat. I couldn’t imagine wearing such a thing around my neck. So, I gave up on angora.

I continued to read about angora, admire its softness, hear about its warmth, respect those who raise the bunnies and love their fiber. But I had no interest in spinning it.

Moving ahead a few years. I designed and knitted a scarf & hat pair. And I used an Elsebeth Lavold yarn, “Angora” (60% angora, 20% wool, 20% polyamide). Here’s a picture of my friend Sylvia VM wearing the pair. 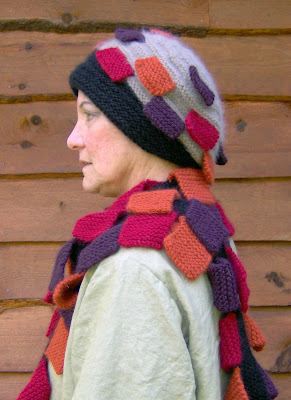 I sold the scarf very shortly after making the pair, but the hat has languished in my inventory for four years. I personally thought the hat was kinda cool and was surprised that it didn’t sell. This fall I decided it was time to remove it from my for-sale inventory. I thought about gifting it to someone, but since it had received so little sales interest I thought it might not be a welcome gift. So, I decided to use it myself, despite it being a bit too large for my pin head.

Epiphany! Although the hat is a little sloppy on my head, it is magnificently soft AND warm. Even in the most brisk December wind, this hat has kept my ears happy. And, I have received a surprising number of compliments on the hat since I started wearing it out and about.

So, I’ve changed my mind. I like angora, and I will spin some in 2012. And perhaps I’ll formalize the pattern for the scarf and hat.
Posted by Amy Tyler at 8:52 AM No comments:


Yesterday I got new tires put on my car. I was dreading spending the money – so many other bills to pay – but it needed to be done. As I drove away from the car place (Marathon Automotive, the absolute BEST auto repair place anywhere), I instantly knew that I’d done the right thing. Watson was a pleasure to drive.

“Watson” is what I’ve named my car. So I can say, “Come Watson, come! The game is afoot!” Believe me, I know that it’s incredibly arrogant to believe oneself to be Sherlock Holmes. But still…

We haven’t had much snow yet this year. Some was forecast for last night and some for this morning, but nothing yet. When it happens, I'll be ready.

In 2006 I spun a cabled yarn with three of the four plies from bombyx silk top that had been dyed in blues and greens by Nancy Finn of Chasing Rainbows Dyeworks. The fourth ply was undyed Optim, a super-stretched Merino wool that feels quite silky. I entered this yarn in the “Spin a Grand Strand” skein exhibit at Convergence when it was held in Grand Rapids. The yarn reminded me of Michigan. And I think of Michigan as being rather like a very very large terrarium. So, that’s what I titled the yarn: “Terrarium”.

And it won first place. 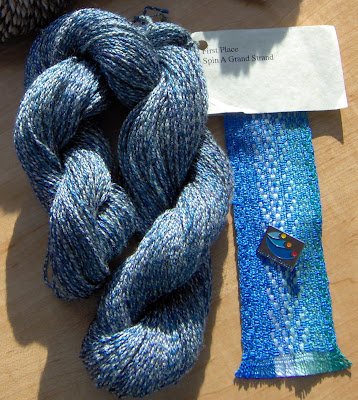 I had always thought the yarn would be put to its best use as a crocheted bag. But I don’t crochet … unless I have to. My very good friend Becky McD, however, can crochet. And magnificently well. So, I asked her to crochet a bag for me out of the Terrarium yarn. She made two bags: 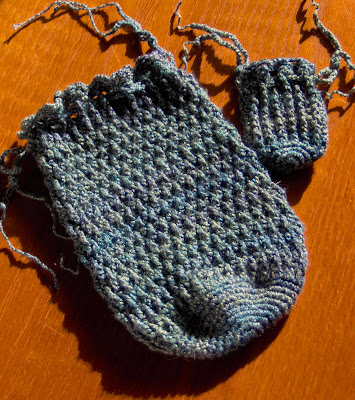 These are not the only bags she’s crocheted for me. See? 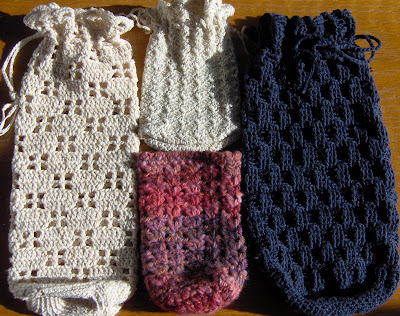 The small white bag she crocheted from some yarn that I’d inherited from my dear friend CiCi Rock when she died in 2004. So the yarn is from one great friend, and the crocheting is from another great friend. I especially treasure this bag.

The small red bag isn’t really a bag at all. The yarn was some of my handspun; an experiment that I thought had not gone well. I was going to chuck the yarn, but Becky asked me to give it to her instead. Well, of course she could have it! A few years later, I was preparing to attend a fiber retreat at a location where alcohol was not allowed. Becky and I were in a grocery store and I found some wine in cute little juice-box-like containers. She suggested I take these with me to the retreat and just cover them up. And she crocheted a juice box cover for me so that I could camouflage my illicit “grape juice”. I must say that I rather liked the yarn after she’d made this bag for me. Not so much of a failed experiment after all!
Posted by Amy Tyler at 8:44 AM 1 comment:


Most of my travels to teach spinning workshops are by car. So, I usually take two wheels with me: my sturdy and reliable Louet S10-DT and my mechanically magnificent and adorable little upright made by Rick Reeves. Here’s a picture: 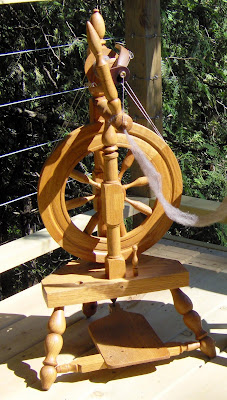 I did take both wheels with me for my October road trip, first to the NYS Sheep & Wool Festival in Rhinebeck, NY, then to the Southeastern Animal Fiber Fair in Fletcher, NC.
One of the workshops I taught at SAFF was “Plying Balanced Yarns”. And one of the participants in that workshop was Linda Martin (aka “Tropical Twister”, seabreezespinners.com
). She is a big Reeves fan, and she admired my sweet little Reeves wheel. She has a couple of her own (not, however, the upright!). We oohed and cooed about the wonders of Reeves wheels.

A few weeks after meeting Linda, she sent me a present: a lovely orifice hook made by Rick Reeves. Oh, yeah! Thank you, Linda! 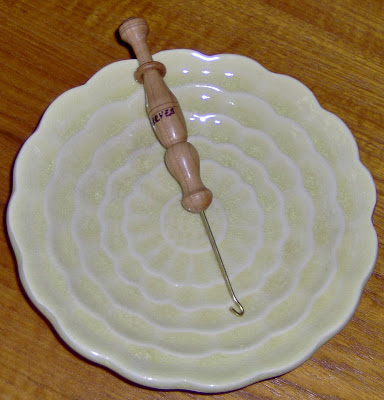 Linda also has an etsy site, where she sells yarn, jewelry, and the occasional Reeves orifice hook. Take a look.

Now retired from wheel making, Rick Reeves made some absolutely magnificent spinning wheels. You can see pictures of the wheels he used to make on the website, Detta’s Spindle. Rick Reeves sold the rights to his saxony style wheel to the Schacht Spindle Company, which now makes both the 24” and the 30” saxony Schacht-Reeves wheels .

I used to have an original Reeves 24” Saxony wheel, but I didn’t use it enough so I sold it. Now, I miss it. Wish I hadn’t sold it. I look at this picture and think of what could have been … yarn-wise. 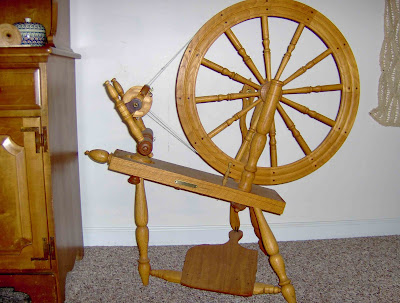 By the way, if you have an original Reeves wheel, you can still get bobbins for it from Carol Leigh’s Hillcreek Fiber Studio . I’ve purchased several from them. I think I now have 12 bobbins for my upright. Is that enough?

One more thing: everyone who knows me knows that when I kick the bucket, my friend Sylvia VM inherits my Reeves upright wheel and all its accessories. Now it's public, now it's official. Until then (and there are no immediate plans!), I will gleefully use my Reeves wheel daily or nearly so.
Posted by Amy Tyler at 10:37 AM No comments: