I’ve been quiet recently, blog-wise. That’s because I moved in early November. On the same day that I moved most of my stuff, I also started working part-time at a local chain department store. Just for the holiday season. But still. I’ve been busy.


I’ve moved into a sweet, cozy, new house in Inland township, Benzie county, Michigan. While I was a renter in Lake Ann for the past five years, some of my furniture and fiber equipment was stored by various friends. In re-gathering all my stuff in this new house, it has become quite clear to me that I HAVE TOO MUCH STUFF.


I have a small basement (that’s where the wood stove is located) that I want to use as a studio for sewing, weaving, and fiber preparation (my knitting and spinning will be largely upstairs). I thought I would want to begin using my great wheel, but it simply takes up too much valuable space. So I have decided to sell it. 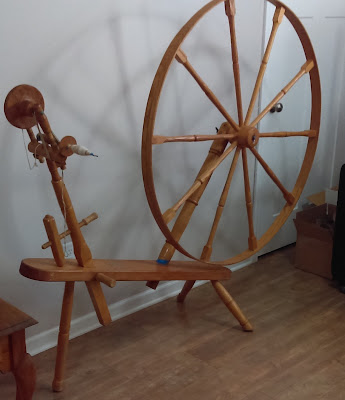 I got this wheel from Gladys Strong, a friend and fiber artist who passed away a few years ago. Shortly after I got this wheel, I moved and put the wheel in storage. So, I have not actually used it. All the parts are there. I think it could really use a new drive band, but otherwise it’s good to go.


The drive wheel is 48 inches in diameter. The drive band attaches to an accelerator, and another band attaches the accelerator to the quill. The drive wheel has a groove in it for the drive band. Many of the wheel’s parts, but not all, appear to be made of oak wood. There is a plaque on the table that reads “SPINNING WHEEL HANDCRAFTED BY Joseph Danhoffer 1986”. Gladys lived for a long time in Virginia and I think the maker of this wheel may have lived there. 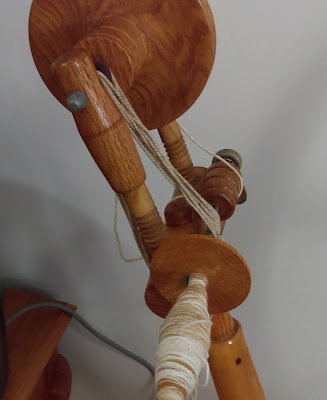 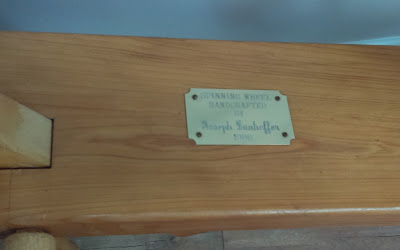 I am asking $150 for the wheel. PICK UP ONLY. If you are interested, please contact me: atyler@centurytel.net or amy@stonesockfibers.com


In the new year, I will be “divesting” of other fiber stuff, including commercial yarns (I’d like to reduce my stash by 25%), and knitting and spinning magazines, and possibly another wheel. Stay tuned. Also, I still have three more sock patterns to post before my 61st birthday in February.
Posted by Amy Tyler at 10:57 AM No comments: