My copy of the Spring issue of PLY Magazine  arrived in yesterday’s mail. It’s all about silk. And there are three articles in it that I wrote, about silk hankies. Two of the articles contain spinning and knitting details of a pair of fingerless mitts that I designed. The other article is about technical issues of spinning silk hankies.

And today the sun is shining. It’s still cold here, around 20degF, and there is plenty of snow on the ground, but at least the sun is shining. Good for taking pictures. So, here’s a picture of my mitts. The pattern is included in the article (PLY Magazine, Issue 4, Spring 2014, pp 59-60). 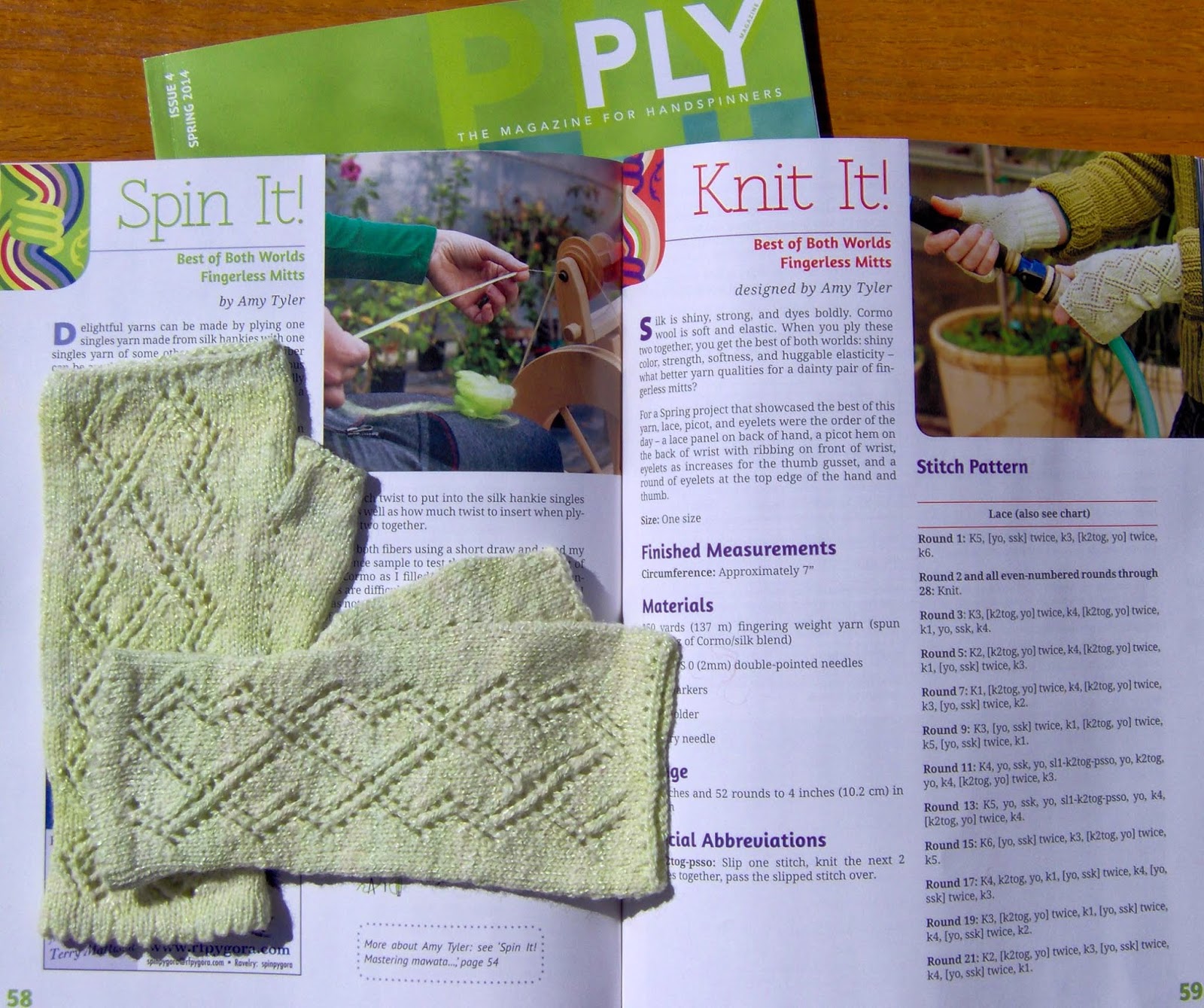 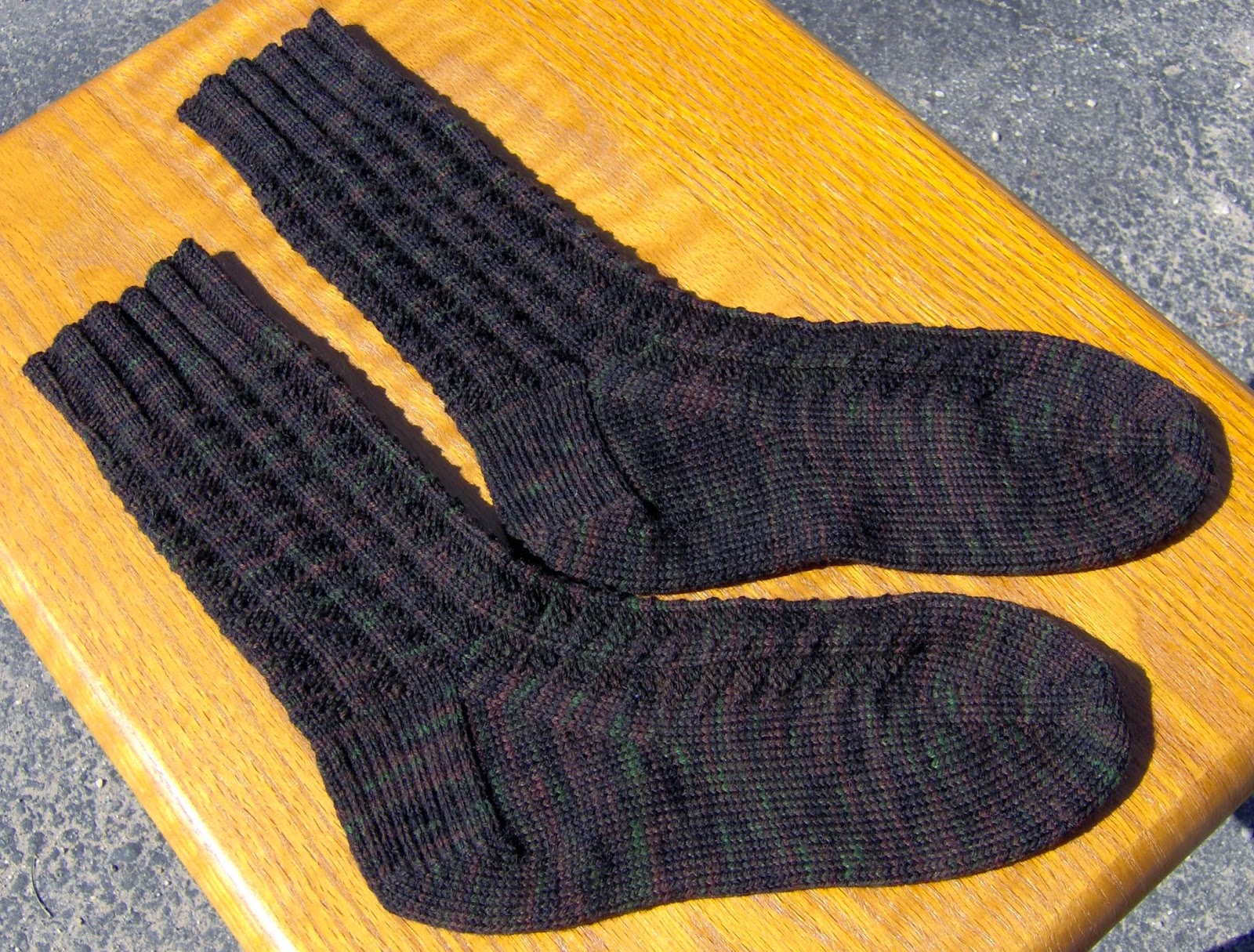 Next week I’m doing another dog sitting fiber retreat. Seven days in a house with Bob (golden retriever) and Ted (Llewellyn setter) on the shores of . Cable TV. And several fiber projects. What fun I’ll have!
Posted by Amy Tyler at 12:13 PM 3 comments:

Marty works fast. Last month I handed off that dreaded sock yarn and unfinished pair of socks (My Middlemarch).  And last week, Marty showed me her solution.

She’d unraveled the sock-and-a-half. Then she took the yarn and added more Z-twist to it. Then she spun up a Z-twist singles from some Merino wool that she’d purchased from Stonehedge Fiber Mill. Then she plied the two together. A star is born! Here’s a picture of one of two skeins that she spun. 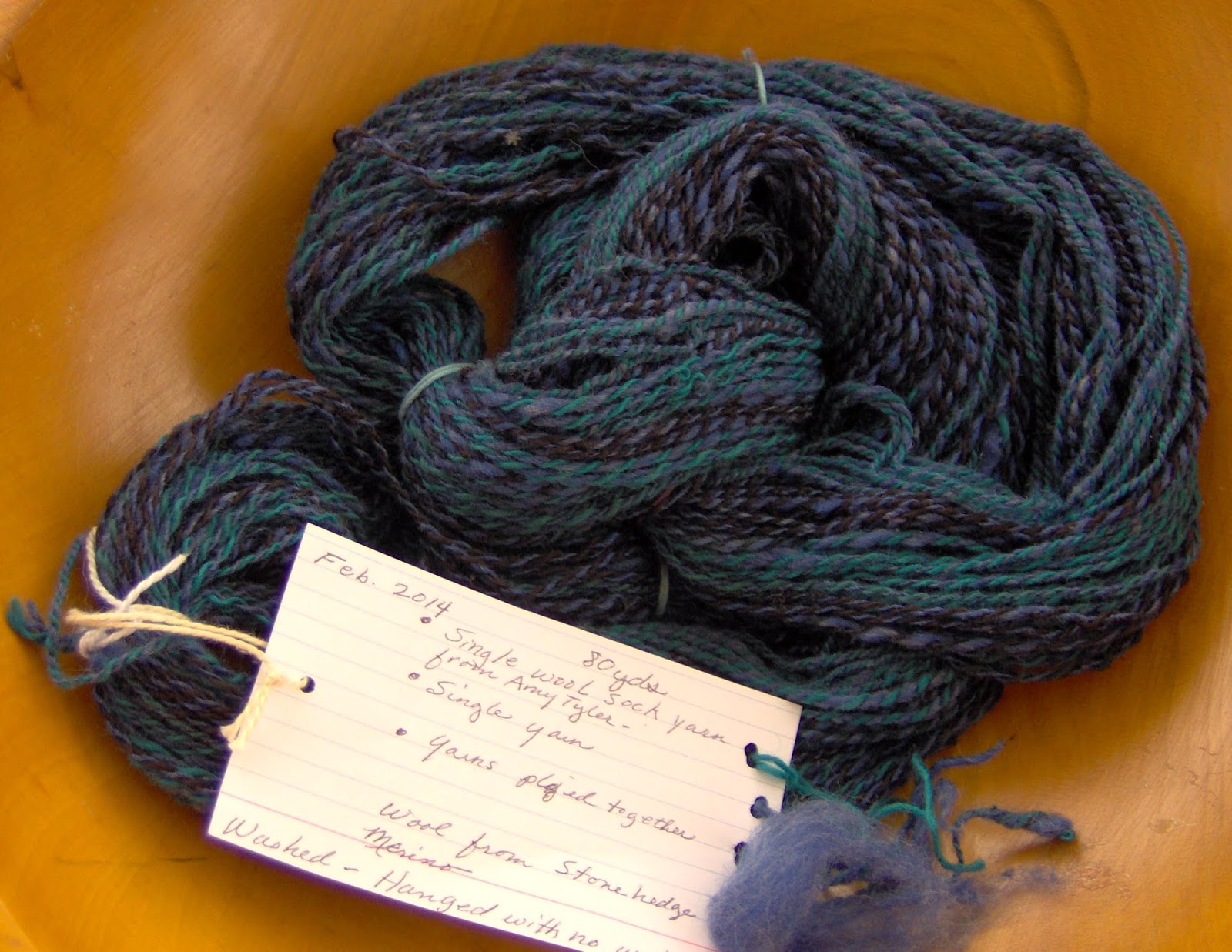 I am thrilled to see new life come to a project that I rejected. I don’t know what her plans are for this yarn, but I look forward to seeing what magic will happen.
Posted by Amy Tyler at 11:34 AM No comments:

March and April are typically quiet months for me; I’m not scheduled to travel next until late April. So, this is a good time of year for me to offer spinning and knitting workshops at my house in .

The fee for each workshop is a very modest $15. All workshops start at 1:30pm and go to 3:30 or 4:00pm. (I purposely chose this start time so that anyone interested could stop for lunch at the nearby Stone Oven.) A minimum of 2 folks will be needed for each workshop to “go”. The maximum is 6.

If you are interested, please contact me by email, atyler@centurytel.net or by phone 231-640-4424. If there is a topic that interests you, but you’d prefer a different date, let me know; there may be some wiggle room.

Wednesday, March 12, 2014
The Surprising Yarn-Over: A “yarn-over” is a fundamental element in knitted lace, but there is more to the yarn-over than lace. The yarn-over is a surprising and versatile element in many forms of knitting. We will explore the use of yarn-overs to make beautiful edges, interesting cords, straight and wavy fabrics. In addition, we’ll cover variations on the yarn-over and how yarn-overs are created in a variety of knit stitch patterns.
Bring 100-200 yards of yarn and knitting needles appropriate for the yarn. 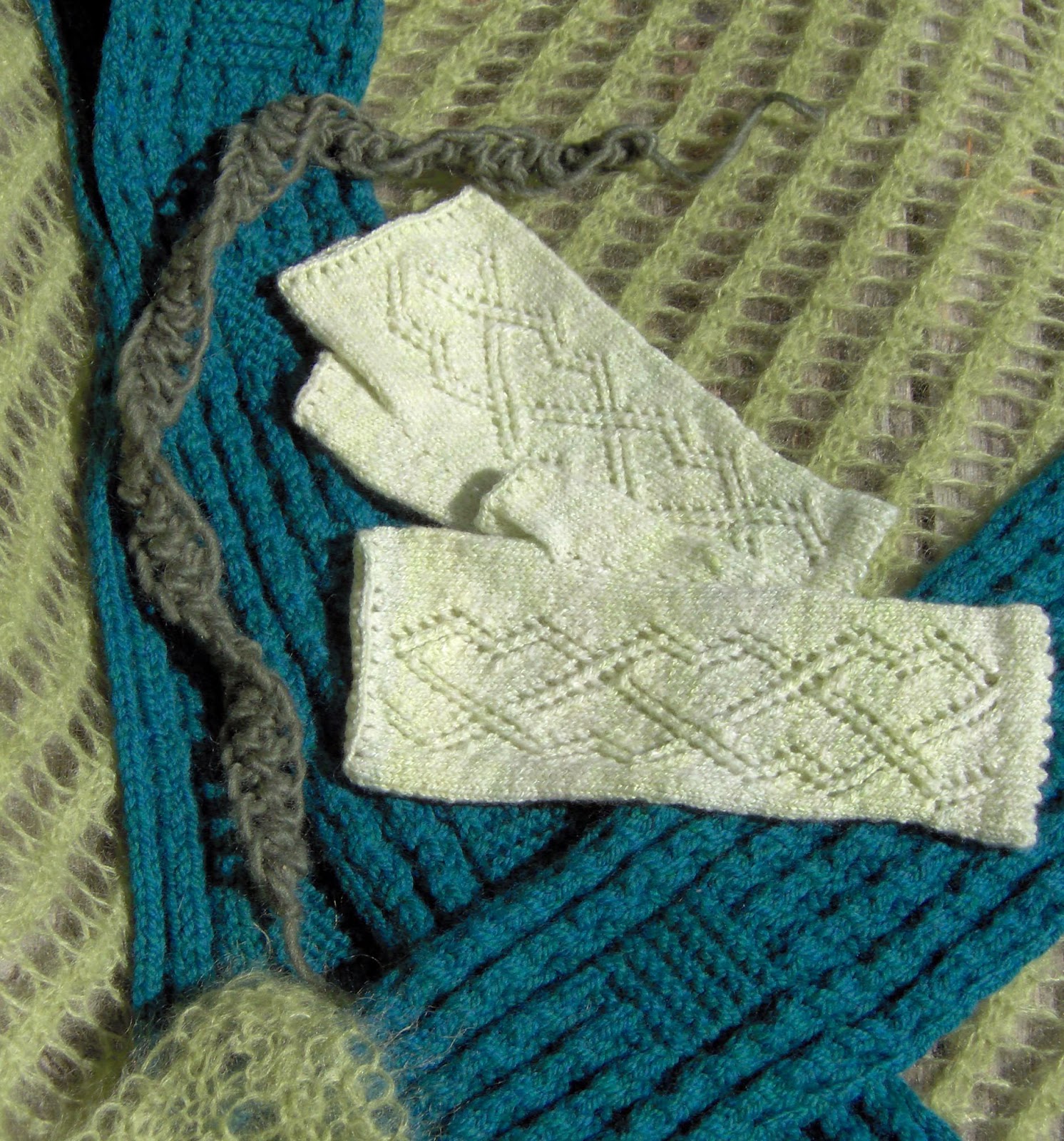 Friday, March 14, 2014
I Heart Duplicate Stitch: Duplicate stitch is one way of adding bits of color to knitting, allowing you to “paint” on your knitting. Other forms of multi-color knitting, such as intarsia and , may seem more “knitterly”, but there are times when duplicate stitch can achieve certain effects in a much easier way. When done well, duplicate stitch can add an expert air to your knitting. We will practice techniques for making duplicate stitch smooth and even. We will play with effects of yarn size and yarn texture and the knit stitches used for the background, so that you will come away with an appreciation of the special advantages of duplicate stitch.
Bring a swatch knitted in stockinette stitch that is at least 30 sts wide and 50 rows long (a solid light color works best), some yarn of the same type as used for the swatch but in a contrasting color, knitting needles appropriate for the yarn, a darning needle. 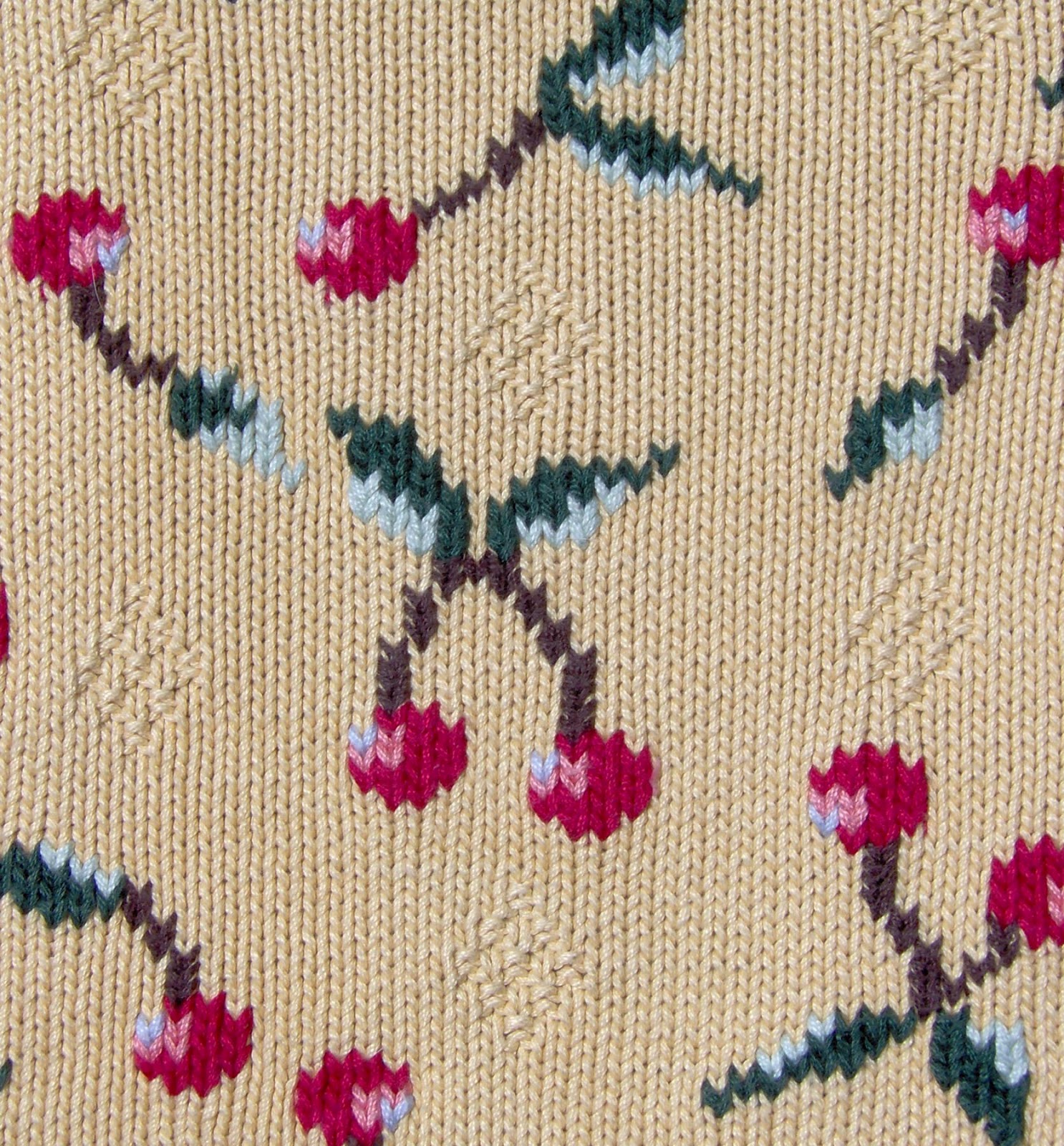 Wednesday, March 26, 2014
Creating Crepe Yarns: Crepe yarns are 3-ply yarns in which the twist direction and order of plying is manipulated. We will cover a variety of these yarns. We will do some spinning of singles, but mostly we will ply.
Bring 2 bobbins partially filled with Z-spun singles, 2 additional bobbins, your spinning wheel, and a lazy kate.

Friday, March 28, 2014
Q & A: Spinning: Here’s an opportunity for you to determine the content of the workshop. If you have specific topics or questions about spinning, preparing fibers, or finishing yarns, please supply them to me at least 24 hours before the workshop – BY EMAIL, PLEASE. We will cover topics as I receive them. Or, feel free to bring your projects or questions to class and we’ll cover them there.
Bring your spinning wheel, a couple of bobbins, and any projects or tools that you have questions about.

Wednesday, April 2, 2014
Spinning Wheel Maintenance: Do you want to get the most out of your wheel? A bit of maintenance will most certainly help. We will cover how to care for wood, drive bands, oiling/lubricating, and trouble shooting. Your wheel will thank you.
Bring your spinning wheel, oil, rag, and one bobbin.

Wednesday, April 9, 2014
Q & A: Knitting: Here’s an opportunity for you to determine the content of the workshop. If you have specific topics or questions about knitting, your knitting projects, understanding patterns, blocking, or yarns, please supply them to me at least 24 hours before the workshop – BY EMAIL, PLEASE. We will cover topics as I receive them. Or, feel free to bring your projects or questions to class and we’ll cover them there.
Bring some yarn, some knitting needles, and whatever project/pattern you’d like.

Friday, April 11, 2014
Knitting Petoskey Stone Medallions: In this workshop we will knit a medallion inspired by the state stone of , the Petoskey stone. The medallions are flat circles, knitted from the center out. When a series of these medallions are crocheted together, you can change the circular shape to 4-, 5-, 6-, or more-sided pieces.  We will cover a circular crochet cast-on, how to knit circularly with 2 circular needles, 2-stitch cable patterns, and crocheting medallions together. With this approach, you can make scarves, afghans, hats, pillows, and more.


Bring 100 yards or so of yarn (1 or more colors), 2 circular knitting needles of the same size (but can be of different lengths) appropriate for the yarn, a crochet hook similar in size to the needles, and a darning needle. 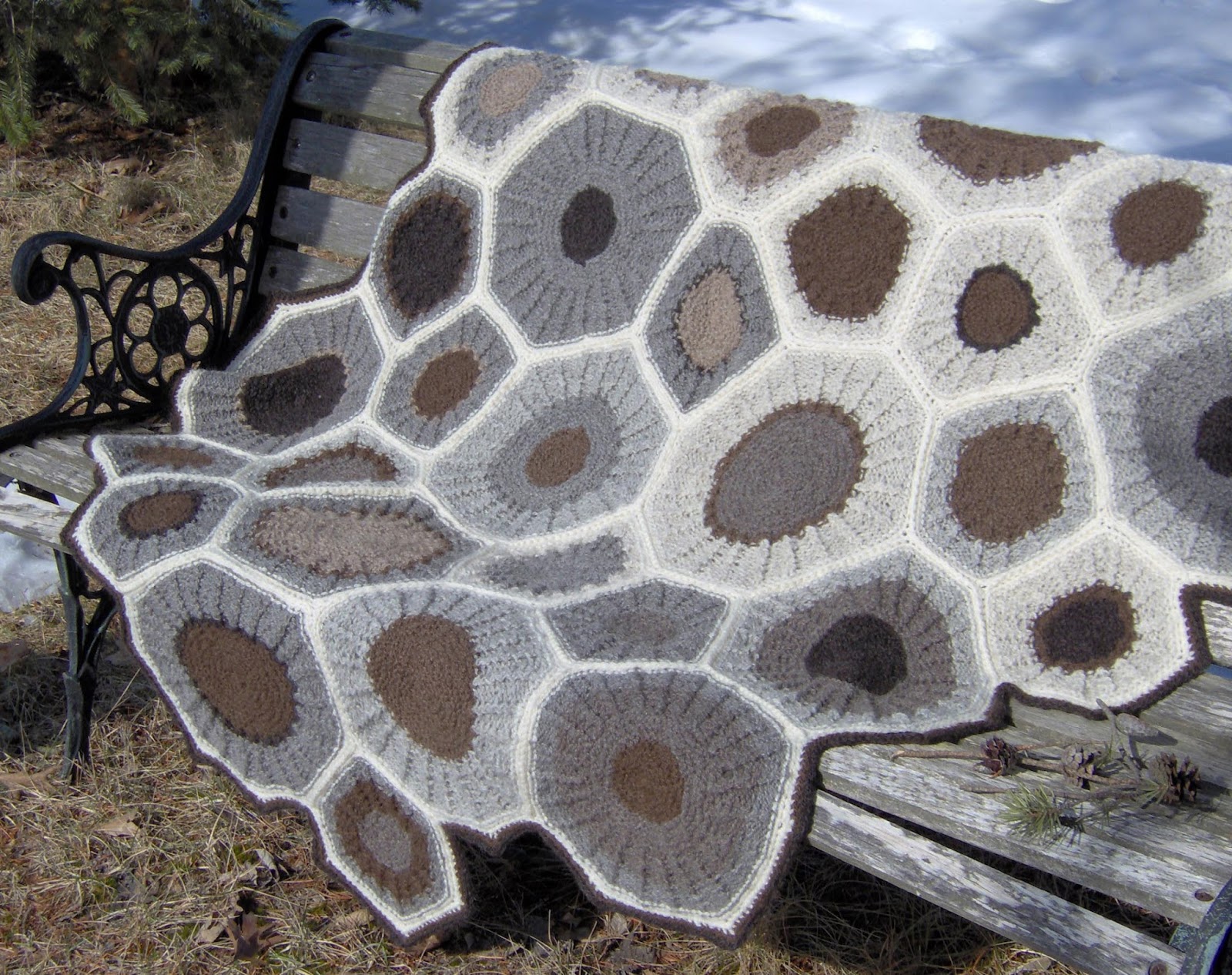 Jill returned from late last Friday, thus ending my dog sitting fiber retreat. It was a true winter wonderland getaway. I snow shoed at least four times a week. I got my fill of snowy blowy cold cold cold weather. I got some good dog time. I watched loads of movies. And I got a goodly amount of fiber stuff done.

I got most of my movies from either the library or the Interlochen library. Interestingly, I ended up picking several American and British movies that focused on the Middle East: Lawrence of Arabia, , , and Syriana. I’d seen them all before, and enjoyed watching them all again. Now I’m thinking I should watch a bunch of movies set in the that are made by Middle Eastern film makers. Any suggestions?

About a week into my retreat, the weather warmed to above freezing temperatures for just two days. This caused the snow on the metal roof to slide off. There is something charming to me about these roof avalanches…..unless they trap you inside. Which this one did. I was unable to get out of the garage, but I was able to get out the front door and climb over the pile of snow. The snow plow guy got me out a couple days later. Here’s a view of the front of the house before the warm up. 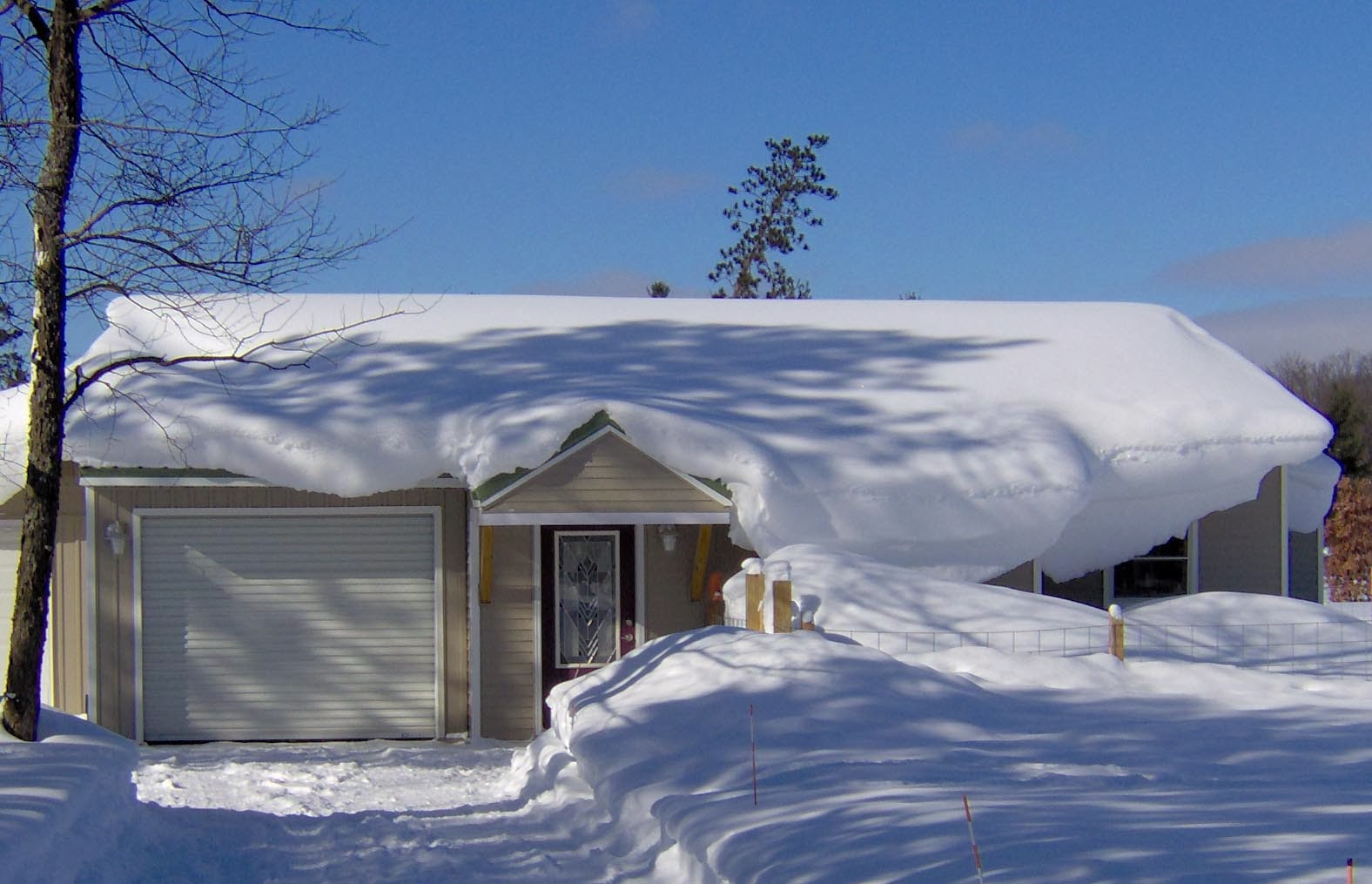 Here’s a view after the roof avalanche. 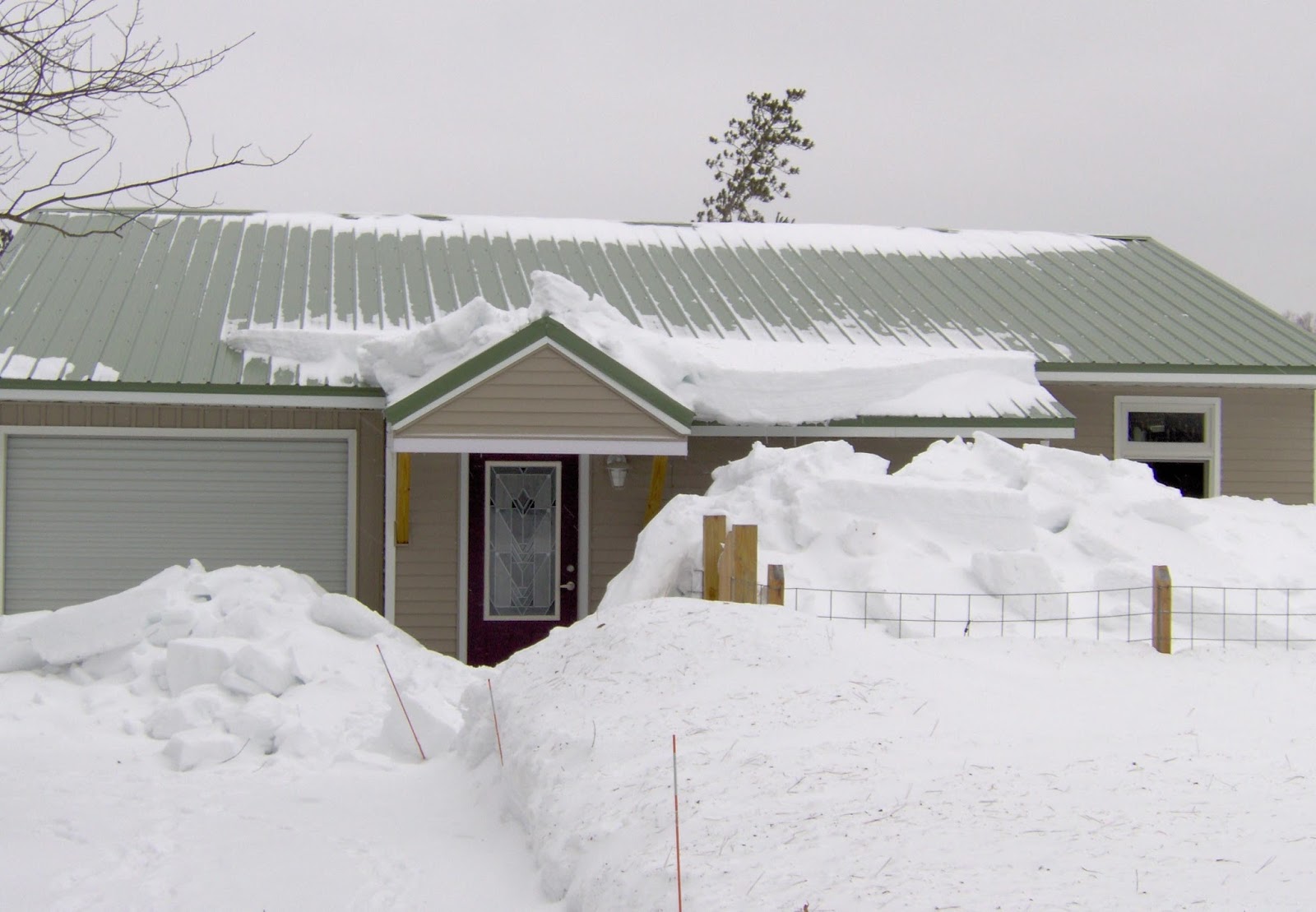 Did I mention that after only two days above freezing that temperatures plummeted? That they did. And it’s been very cold ever since. (By the way, it’s snowing today.)

As for my list of fiber projects, here’s the final tally:

Knit a pair of socks. Done. I modified the “Gentleman’s Shooting Stockings with Fluted Pattern” from Knitting Vintage Socks by Nancy Bush. I used a skein of “Foot Notes”, a yarn dyed by Kimber Baldwin of Fiber Optic Yarns that I bought at SOAR last October. The yarn is 80% superwash merino and 20% nylon. I picked a colorway of black, brown, and green: “Northwoods Batik”. Kimber mentioned that she devised this colorway for men’s socks. But my sock stash needed a pair of socks in this colorway. Yeah, "needed".

Finish the Curvy Corner Shawl. I did it! It’s not blocked yet. I will get that done this month. And I will start writing up the pattern. I do love the shape, the drape, and the sheen of this shawl. Light enough for a summer evening, but warm enough for winter wear.

Weave a watch band on my little inkle loom. Mostly done. I need to put a twined edge at the end, then I can cut it off the loom and sew the hardware onto it. Here’s a picture of the band in progress: 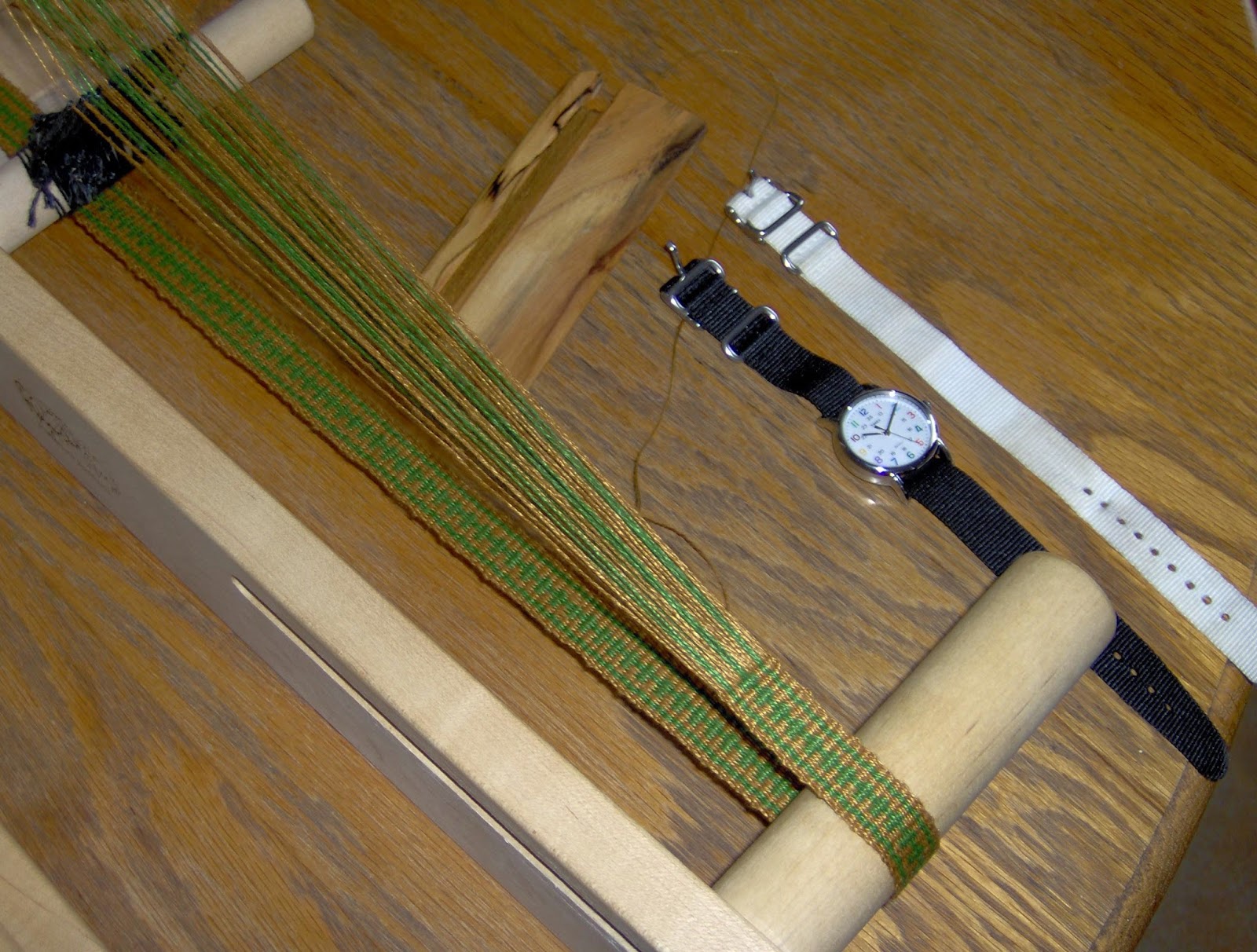 Repair a sweater. Well, I did knit up a swatch to practice on. Just as many knitters are hesitant the first time they cut steeks in their knitting, I’m hesitating cutting a hole in the swatch. Soon. Very soon.

Spin some dog hair. This did not get done, mostly because it was logistically more challenging than the other projects. So, I must get to this now that I’m back home.