I first wrote about my tangle project in November: a very big skein of lace-weight cashmere yarn that had gotten tangled by a fiber-loving pooch.

Little did I know this would become an epic detangling task. Here’s a picture after at least 10 hours of detangling work: 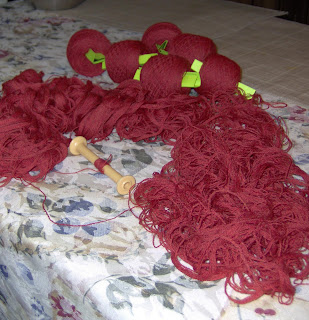 Now, you might think it’s not worth the time. I mean! The original cost of the skein (circa 2001) was probably around $25. Why would I spend more than 10 hours of my working time on this skein?
Early on in the detangling, I was tempted to quit and just chuck the yarn. But then I realized I was actually learning something from the process. I’ve done my fair share of undoing tangles so I didn’t expect this to be a new experience. But it has been.

This yarn, remember, is lace-weight. That means that the yarn doesn’t have much mass per length; the weight of a single strand does not have much umph (ie, force). And it’s a very big skein; I don’t know how many yards but I’m sure it’s well over 800. And this skein had been sitting around for years, gathering a bit of dust no matter how carefully it was stored, and the individual strands were a bit stuck to each other.

Because of these things (skinny yarn, lots of it, old yarn), I had to make a few specific adjustments to my detangling:

2. Work in chunks. Fortunately the yarn was not one big mess. It was more like several smaller messes. So, I would work for about 2 hours at a time. Some sections have been very slow going; others a bit faster.

3. I found myself putting down the bobbin to pull strands of yarn apart sideways. I quickly learned that pulling lengthwise on this yarn only produced a miserable snarly knot.

4. After awhile, I realized that I did not have to always loop the bobbin through strands. If there was only one strand over the winding strand, then I would loop the bobbin through. If there were two or more, I was able to unfold the tangle and not loop through. I gradually developed an intuition about whether to flip over the big tangle or flip part of it or loop through it.

5. For such skinny yarn, keep your eye on the point of work; do not look too far in advance of where your winding yarn is disappearing into the tangle.

6. Don’t drop the bobbin. Of couse I have dropped the bobbin now and then. And words would come out of my mouth that would make my dog leave the room…

I think I’ve got about 4 or 5 hours left. Then I’ll feel obliged to actually use the yarn! Perhaps it’s now time for that Orenburg shawl I’ve been meaning to knit….
Posted by Amy Tyler at 8:44 AM