A Dog Sitting Fiber Retreat. What?!


Next week I start dog sitting for some friends of mine.  I’ll be staying at their house for nearly two weeks.  I’ll take my dog, Toby.  Toby and Mari (their dog) have known each other for a number of years.  They get along just fine! 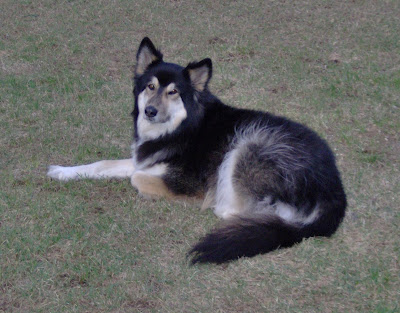 I have a grand plan to use my time at their house as a personal fiber retreat.  I will spin, weave, and knit up a storm.  And get some writing done too!  Oh yeah, I’ll walk the dogs a couple times a day…

My spinning plans:
I have a bunch of roving from Hidden Valley Farm and Woolen Mill  that I bought last summer for a “Spin-Knit Nexus” project (see blog entry June 3, 2011)  .  I’ve got 1 pound of a colorway called “Just Before Dawn” that is 80% Coopworth wool and 20% silk, and 1 pound of a second colorway called “Peacock” that is 75% Coopworth wool and 25% mohair.  I will make a set of 2-ply yarns from these two colors then knit them together into one project … a vest, I’m thinkin’.  One yarn will be 2 plies of Just Before Dawn, a second yarn will be two plies of Peacock, a third yarn will be a marl of one ply each of the two colors.  A fourth yarn will be an intermittently wrapped yarn from the two colors.  You can see an example of this yarn on my blog, September 5, 2011.

My weaving plans:
I’m taking my rigid heddle loom with me, and a big bag filled with several colors of bamboo yarn that my friend Carol S. dyed for me.  I want to weave a series of bamboo scarves.  Or I may just use the fabric I create in a sewing project….!

My knitting plans:
I’ve begun knitting a second version of my “Brick Road Afghan”.  This one is for Chris Roosien of Briar Rose Fibers.  Of course I’m knitting it from some of her lovely yarn, “Abundance”.  I’m nearly a quarter of the way through.  I expect to finish it during my retreat.  You can see a picture of the afghan in my blog entry on November 13, 2011 .

I want to start a scarf for my friend Molly L. from a skein of quiviuk.  Mmmmm.  I had originally selected a pattern from Nancy Bush’s book, Knitted Lace of Estonia, but I’ve changed my mind.  Last summer I bought a charming scarf pattern, “Fernfrost” designed by Ann Hanson (knitspot.com ) .  I will make a skinny version of this scarf; there’s only 28.5g of the yarn.

I’d also like to get back to a sock pattern that I started designing last year.  The sock is comprised of several slip stitch patterns.  I’m thinking I’ll call this pattern “Cityscape”.  I got the yarn in in April 2010.  I started the first sock in September 2011…..it’s been stalled at the heel since then.  Get it done, whydoncha!

My writing plans:
I’ve got to get started on an article about an afghan I just finished.  It’s knitted (with a bit of crochet) out of hand spun Shetland wool in natural colors.  It’s meant to be representative of the Petoskey stone (the state stone of ).   I posted a picture of some of the early medallions in a blog entry on April 21, 2011.

My work is cut out for me.  I hope I make the most of this “retreat”!  Any words of encouragement would be most appreciated…..
Posted by Amy Tyler at 9:37 AM