Here is the fifth of twelve sock patterns in my journey of 60 stitches. The featured stitch pattern has a 10-stitch repeat. So, 6 repeats equals 60 stitches total. I’ve used a lace stitch pattern that I found in Debbie Tomkies’s book, Knit Stitch Dictionary (Interweave, 2015): pattern #57, “Thistle”. Rounds 6-9 of this sweet lace pattern create a scalloped effect that I adore. 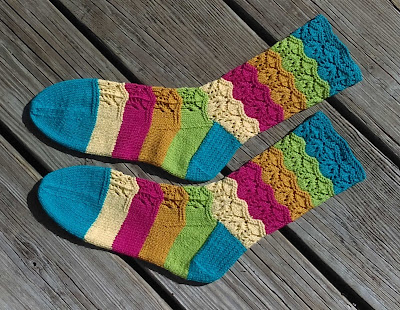 This is another one of those patterns that involves yarn-overs between other than two knit stitches. If that is new to you, you might want to refer to an earlier blog post.


I used Skacel CoBaSi yarn for this sock pattern. This yarn is 55% cotton, 16% bamboo, 8% silk, and 21% elastic nylon. This is a great yarn for summer socks. I’ve made several pairs of socks from this yarn, so for this sock pattern, I used leftover bits (deep turquoise, kiwi, gold crest, ripe raspberry, butter cream). If you use just one color, it’ll take 2 skeins (220 yards, 50 grams per skein).


Leg:
A couple of notes about this stitch pattern:


1) I changed color after each 16-round repeat of this pattern.
2) If you work this sock on double points, there will be two rounds (6 and 11) where the last stitch on each needle is a yarn-over. It’s easy to forget the last yo of the needle.
3) The s2kp may be new to you. Here is how it’s done: slip 2 stitches as if to k2tog, k1, pass 2 slipped sts over.


Here is the pattern charted: 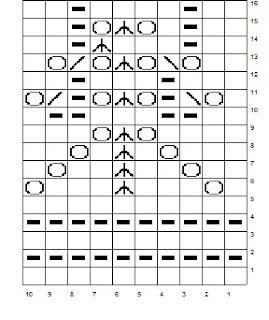 Work these 16 rounds five times, or until desired length, end having finished a Round 16. Leg measures approximately 6 ½ inches.


Heel Turn:
The turned heel is made up of “short rows” with decreases. This process shapes the heel. As a result, for each row you will work a different number of stitches, and you will end up with fewer total stitches than you started with.


Gusset:
(My colors for the foot: kiwi, then gold crest, then ripe raspberry, then butter cream, leaving turquoise for the remainder.)


Pick up and knit 19 sts along the right side of the heel flap. To do this, insert right needle under the first edge stitch (under both strands of the stitch), wrap the working yarn around the needle, and pull a stitch through (one stitch has now been picked up and knitted). Repeat this process until 19 stitches have been picked up.


Slip the following 30 sts onto one needle. These stitches constitute the instep of the sock. Work these 30 sts following Round 1 of the instep pattern (see below).


Pick up and knit 19 sts along the left side of the heel flap.


Round 2: On Needle 1, knit. On Needle 2, continue working instep pattern as established. On Needle 3, knit.


Instep Stitch Pattern (worked on Needle 2):
I worked Rounds 1-5 of the Thistle pattern all the way across the instep, but I worked rounds 6-16 only on the middle 20 stitches of the instep. I used stitch markers to help keep track (thus the “place marker” that is in Round 1).


Foot:
After completing all the gusset decreases, continue working even, and continue repeating the instep pattern for as long as you want. I worked four repeats of the pattern, then Rounds 1-5 again. Then I continued in st st. Work until foot is 2 ½ inches shorter than desired foot length.


This toe is shaped so that it gradually narrows. To achieve this effect, you will work a “Decrease Round” more frequently as the toe progresses.


Cut the working yarn, leaving a 20 inch or longer tail. Thread this tail through a darning needle. Orient the sock so that the 2 needles are horizontal, the instep side of the sock is facing you, and the working yarn is coming off the right side of the needle in the back.

If you have any questions – or if you find any mistakes – you can either leave a comment on this blog page or email me: atyler@centurytel.net or amy@stonesockfibers.com


This pattern is free, but it is still copyrighted. So, feel free share a copy of this pattern or knit these socks, but please do not sell the pattern or sell socks made from this pattern. Thank you.
Posted by Amy Tyler at 9:14 AM