For the past month, I’ve spent Thursday afternoons at “Open Knitting” at Interquilten , a local quilt and yarn store (1:00 – 4:00pm every Thursday. All are welcome!). Yesterday, in an off-handed way, I asked if the store had any “sheep fabric”. Oh, yes! Once I saw it, I could not resist. I bought all that was on the bolt, about 1 ¾ yards. I have no idea what I’ll do with it. I’m waiting for inspiration. Here it is: I mean! Could you resist it?

As for “Sylvia”, I finished the spinning. The first skein – from from the fiber that I’d washed, combed, then carded – weighs 2.90 ounces and has 296 yards. I did manage to get a bit of a streaky effect, but not as dramatic as I’d hoped. I’m still optimistic that I’ll get a nice effect when it’s knitted up.

The second skein – from just the darkest of the extra fiber that Sylvia had washed and combed and given to me – weighs .85 ounces and has 86 yards. I plan to use it for the toes of the socks.

For both skeins, I spun the singles on my Reeves upright wheel, using the smaller of the two whorls. It was a wonderful opportunity to concentrate on the spinning needs of this most magnificently springy fiber. I then plied the yarns on my Louet S10-DT, also using the smallest whorl.

Here’s a picture of the two skeins sitting atop the sheep fabric (I think the lighter skein has much more personality than shows in this photo): 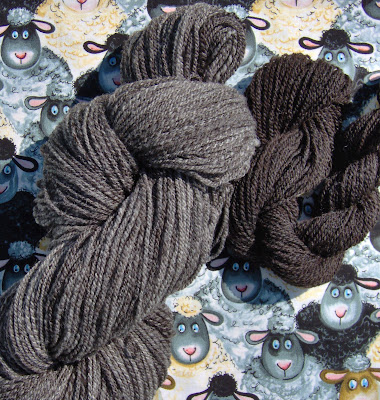