I got home late last night from my trip to Jefferson, WI for the Wisconsin Sheep & Wool Festival . It was a terrific trip. The highlight was after the festival: my stay overnight Sunday at the home of Carol and Paul Wagner. They own and run Hidden Valley Farm & Woolen Mill.

We three left Jefferson on Sunday (after a good dinner at a local Mexican restaurant) at about 7:30pm. It was a three-vehicle caravan. Carol was in the lead with the truck and trailer, then came Paul with the van and camper, and I brought up the tail in my trusty Subaru. We arrived at their farm at about 9:30pm. I was exhausted, but I imagine that both Carol and Paul were more so! The sky was clear and the Milky Way was visible. Ah!

After a night of sleeping deeply, I got up to fresh coffee, eggs, bacon and toast. Yum! I wandered around the near surrounds of their old farmhouse (which had earlier belonged to Paul’s parents) and took pictures. 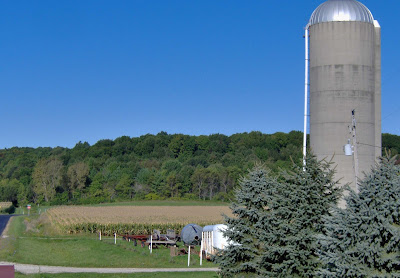 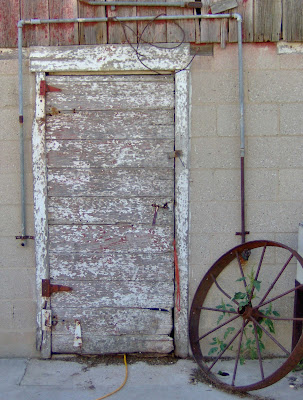 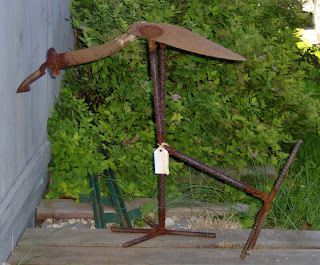 Carol and Paul showed me the workings of their fiber mill: washing machines (old ringer types), drying racks, picker, post-picker room (that’s what I call it; I don’t know the official name), roving carder, quilting batt carder. All were awesome machines. The building that served as the retail store was a fabulous space. I walked up the stairs and promptly asked if I could move in. They have so many wonderful ways of displaying their wares. I especially loved the “cabinet” that had once been a paper press. 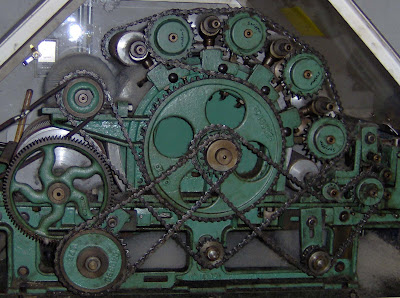 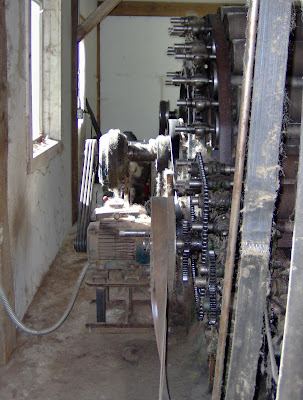 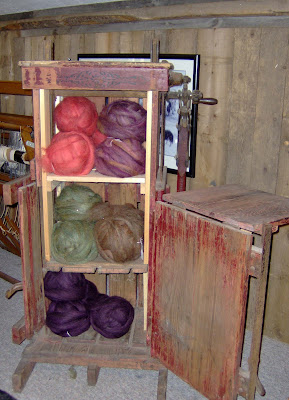 Then Carol took me to the sheep pastures. They raise Coopworth sheep. First off, we visited the lambs (now weaned). There were over 150 of them! Cute cute cute! And Frenchy, the guard llama, was right in the mix. Paul arrived and asked Carol and me to help move the lambs to the next pasture (they rotate pastures frequently). Those lambs did not cooperate! Carol and I tried to chase them around; I was next to useless. Finally they figured out which way to go. Hey, they’re young, like teenagers. No wonder they don’t want to follow directions! 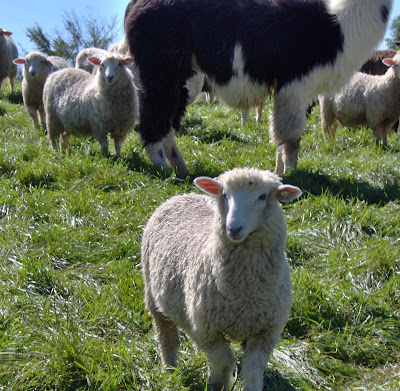 Next, we went to the pasture with the ewes. When Carol and I drove up, they pretty much ignored us. When Paul arrived he said, “Hey, Amy, watch this.” He cupped his hands around his mouth and hollered, “Sheeeep! Sheeeep!” As a group, all the sheep (many more than I could count) swept down the hillside toward Paul, hoping, I’m sure, that he would have something wonderful for them. It was a sight!

The rams were in a third location. They were not at all interested in visiting with us. They were too busy eating some luscious clover. 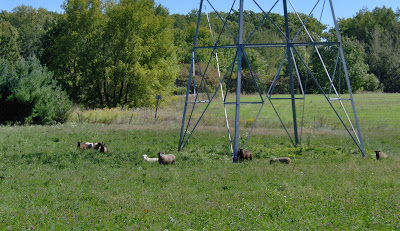 After we had a delightful lunch of ground mutton burgers, Carol and Paul bid me adieu with some peppers, squash, and eggplant from their garden and a hefty chunk of lamb/pork summer sausage. I drove off to Manitowoc to catch the ferry to my side (the “good” side) of Lake Michigan.

Rich! I tell you I’m rich to know such wonderful people. This past week could not have ended better. Thanks, Carol. Thanks, Paul.
Posted by Amy Tyler at 2:13 PM