Last Thursday, Judy McL took her friend Donna and me to Marie Glaesemann’s farm outside of .  For several years now I have purchased fleeces from Marie.  She has a not too large flock of mixed breed sheep.  I’ve written extensively about “Lucy” (a Border Leicester X Romney X Corriedale ewe).  You can read about a sweater, "Tattoo", that I knitted last year mostly from Lucy’s wool.

Of course I bought Lucy’s fleece again this year.  But I didn’t stop there.  I had planned to pick up Lucy’s fleece and Baby’s fleece (Romney X Corriedale X Coopworth).  When I took a peek at all of Marie’s fleeces, I was compelled to take home two additional fleeces:  Lonnie (Romney X Border Leicester X Corriedale) and Lizzy (Suffolk X Romney X Corriedale X Ile de France).  Lucy’s fleece is grey; the others are white, but each is distinctly different from the others.  Lizzy is super spongy and a French vanilla color of white.  Baby is the softest of the lot, chalkier white and with dainty but distinguishable crimp.  Lonnie has a bold crimp, long staple length, and luster that won’t quit.

In addition to my four fleeces, I was picking up fleeces for local fiber friends:  Puff for Margaux S, and Choco and Clara for Carol S.  Here I am with the seven fleeces (that somehow had to fit into my car).  Judy took this picture…and all the other pictures in today’s blog. 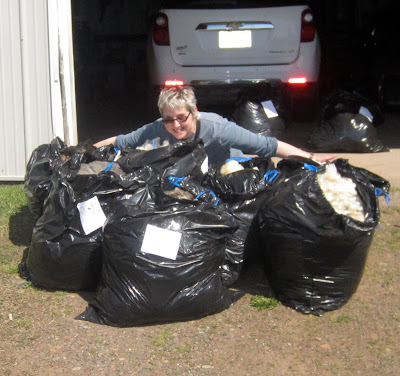 Marie then treated us to coffee and treats.  After which, we strolled out to view the sheep.  We were having trouble getting the sheep to come over to visit us.  So Marie tricked them by rattling a bucket. 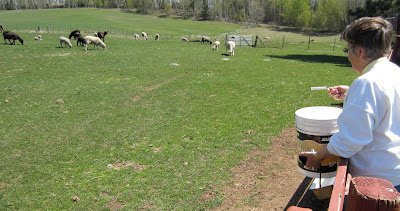 That got their attention. 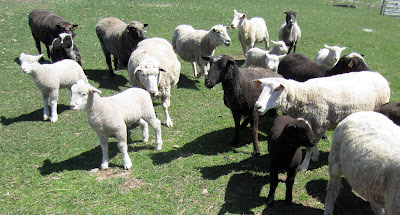 But when they realized the bucket did not contain the hoped-for food, the sheep rambled away.
There were several adorable lambs this year. 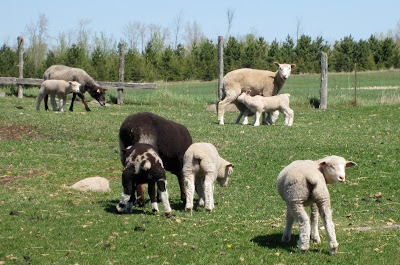 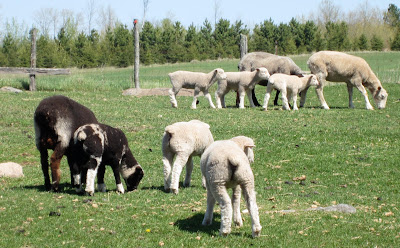 Marie was especially pleased with one black ewe lamb that had white spots on its rump. 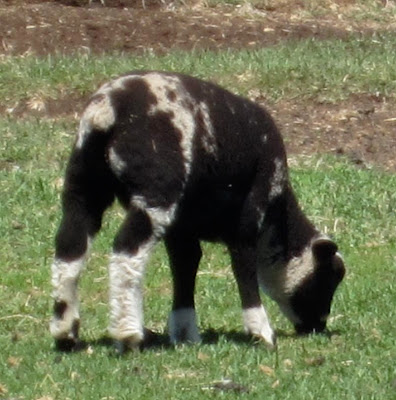 She mentioned that she planned to keep that lamb, and she wondered what she was going to name it.  I piped up, “’Amy’ is a nice name….”  So!  Marie is going to name the lamb “Amy”.  I am really hoping I get to buy Amy’s fleece next year.

After the farm visit, Judy and I spent part of the afternoon at a yarn shop in , Yarn Harbor.  I did not get carried away.  I only bought two skeins of yarn, one of which is a sock yarn in Christmas green, red, and white.  Judy bought a skein of it too.  We are going to knit Christmas socks for ourselves by Christmas this year.  I swear!

That day was a lovely fiber day!
Posted by Amy Tyler at 11:13 AM